Surgical resection, with appropriate negative margins, is the mainstay of treatment for STS. There is no universally agreed margin, but generally 1 cm of soft tissue, or an appropriate anatomic layer like fascia, is accepted.32Closer margins can be accepted in order to preserve uninvolved critical neurovascular structures.

The biopsy tract should be excised en bloc together with the main tumour during the definitive resection. Dissection should be done through grossly normal tissue that is not contaminated by tumour. Critical vessels and nerves can be preserved if they are not grossly involved by the tumour, by dissecting through the adventitia or epineurium. Radical resection of the entire anatomic compartments is not routinely required. In some situations, amputations may be required in order to achieve adequate local control. These are situations where complete resection of the tumour will result in a non-functional limb.

The margins should be marked by the surgeon and reviewed with the pathologist. Should there be a positive gross margin repeat resection to negative margins should be strongly considered. Microscopic positive margins may be acceptable in situations where wide excisions would result in severe morbidity (e.g. when sacrifice of major vessels or nerves is required) in which case, post-operative radiation treatment should be discussed.

Good limb conservation surgery combined with post-operative radiotherapy is standard treatment for limb STS and achieves a high rate of local control while maintaining optimal function. Radiotherapy may be avoided in patients with low grade tumours that have been completely resected or those with small and supercial high grade tumours resected with adequate wide margins.

Post-operative radiotherapy is considered to be the standard of care for intermediate and high-grade STS as well as deep and large lesions. This allows preservation of function with similar local control rates and survival to radical resection.33The majority of patients with low grade tumours will not require radiotherapy, however it should be considered for those with large, deep tumours that are incompletely resected, especially if adjacent to vital structures that could limit further surgery in the future.34,35Patients who have undergone a compartmental resection or amputation do not require adjuvant irradiation assuming that the margins are clear.

The recommended post-operative radiation dose is 60-66 Gy in 1.8-2 Gy fractions. A two-phase technique using a shrinking eld is commonly used; 50 Gy to the initial larger volume followed by 10-16 Gy to a smaller volume.34,35This dose may need to be reduced if the eld includes critical structures (for instance, the brachial plexus). Dose to the skeletal bone should be avoided if possible, to prevent risks of fractures in future, and the volume should take into consideration natural tissue plane/compartments and fascia.

There is a VORTEX randomised clinical trial for extremity STS in the United Kingdom. It compares the standard two-phase conventional radiotherapy technique with a single phase to a smaller tissue volume, in an attempt to spare normal tissue and hence improve subsequent limb function without compromising local control. The study has completed accrual and results are pending.

The value of adjuvant chemotherapy in STS, as with any malignancy, is predicated upon two fundamental issues the rates and patterns of recurrence and the efficacy of any therapy in modifying them. Factors like age, size, depth, histology, and anatomical site have been incorporated into validated nomograms to yield recurrence estimations for sarcomas based upon the cumulative datasets of several specialised sarcoma centres.37,38Despite the greater accuracy in predicting recurrences using these tools, data directly addressing the benefit of adjuvant chemotherapy is patchy and inconsistent.

A European study involving 468 patients between 1977 and 1988 revealed no significant benefit of multi-agent combination adjuvant chemotherapy. 39However, a subsequent meta-analysis evaluating 18 trials revealed absolute risk reductions in recurrence and death of 12% and 11%, respectively, with the use of adjuvant doxorubicin in combination with ifosfamide.40Despite this, the most recently reported large randomised trial using a modern day sarcoma combination chemotherapy regimen of doxorubicin and ifosfamide in 351 patients, two-thirds of whom had extremity sarcoma, revealed no benefit in recurrence free and overall survival.41Concerns have been raised regarding certain aspects of this trial, including the relatively low dose intensity of ifosfamide used, the inclusion of a substantial number of patients with clinicopathological lower risk disease, and the heterogeneity of diagnoses studied. Nonetheless, it remains the largest randomised clinical trial of adjuvant doxorubicin-based chemotherapy in recent years.

Beyond the uncertainty surrounding absolute efficacy, there is also little data to guide the choice and duration of the regimen to be used in adjuvant therapy. A European randomised trial revealed no differences in outcomes between three and five cycles of neoadjuvant epirubicin in combination with ifosfamide for STS with high-risk clinicopathological features, suggesting that, if and when adjuvant chemotherapy is used, more dose intense regimens may not always be superior.42A large criticism of most studies in STS is the inappropriateness of treating disparate histologies, with unquestionably differing biologies and chemosensitivities, in an identical manner. An ongoing randomised trial is thus evaluating a histologically adaptedapproach (using agents with known preferential activity in particular histologies) in comparison with three cycles of epirubicin and ifosfamide. 43At the time of this writing, the role of adjuvant chemotherapy in completely resected STS remains controversial, and must be discussed on a case-by-case basis. In addition, we do not recommend the routine use of adjuvant chemotherapy as standard of care in resected extremity STS.

Extremity sarcomas are predisposed to both local and distant recurrence, with disease-associated mortality predominantly contributed by the latter. Doxorubicin has been used in the systemic treatment of advanced sarcomas for the last 40 years and remains the most broadly active agent. Ifosfamide is another commonly used drug in first line therapy, with a more pronounced disparity in activity across different histologic subtypes.

A landmark randomised controlled trial compared single-agent doxorubicin against the combination of doxorubicin and ifosfamide in advanced STS with more than 200 patients evaluated from 2003 to 2010. While combination therapy doubled objective response rates (26% versus 14%) and improved progression free survival (7.4 versus 4.6 months), overall survival was no different in the two arms.44In second line therapy, there are several active agents, either as single agents or in combination. The combination of gemcitabine with either docetaxel or dacarbazine has demonstrated salutary improvements in overall survival in pre-treated advanced STS in two large randomised phase II studies.45,46Single agent gemcitabine is also reported to be effective in leiomyosarcoma.47

Pazopanib, a multi-targeted tyrosine kinase inhibitor directed against the receptors of vascular endothelial growth factor, platelet derived growth factor, fibroblast growth factor and KIT, is approved for the treatment of advanced pre-treated non-adipocytic STS, following demonstration of a significant progression free survival benefit when compared against a placebo in a large randomised phase III trial.48Several histological subtypes are often treated based upon observed preferential sensitivity to specific agents, such as trabectedin in myxoid liposarcoma49and weekly paclitaxel in angiosarcoma50, emphasising again the crucial need for appreciating the clinicobiological diversity of sarcomas in order to select appropriate therapy.

Figure 1: Treatment Flow Diagram of a Typical Patient Presenting with an Extremity Sarcoma (for details please refer to text) 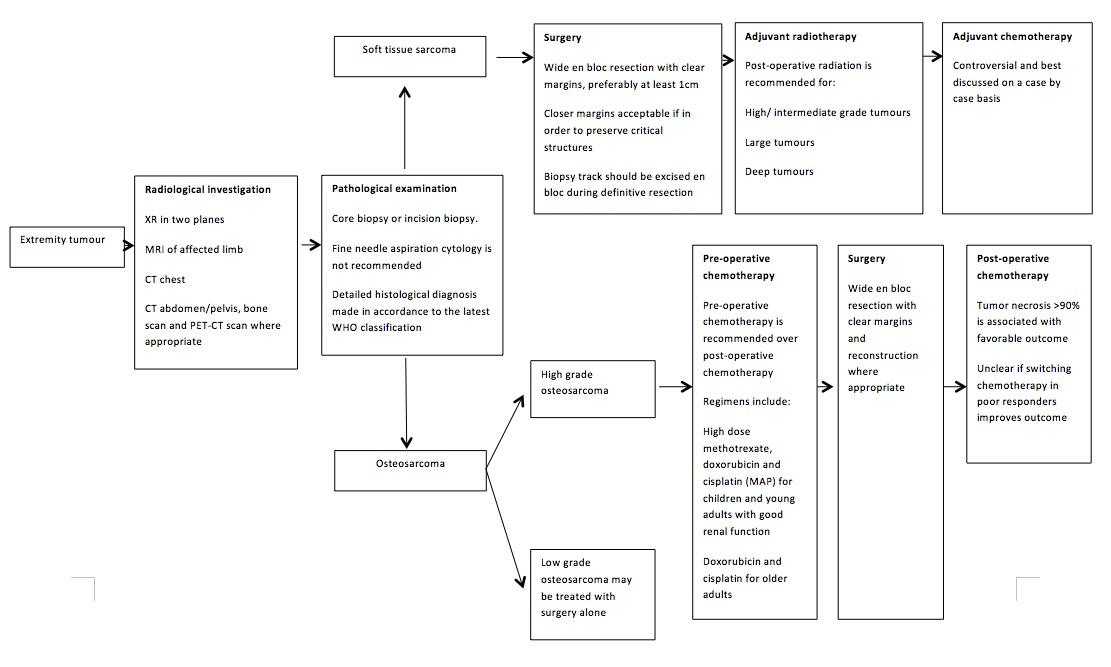 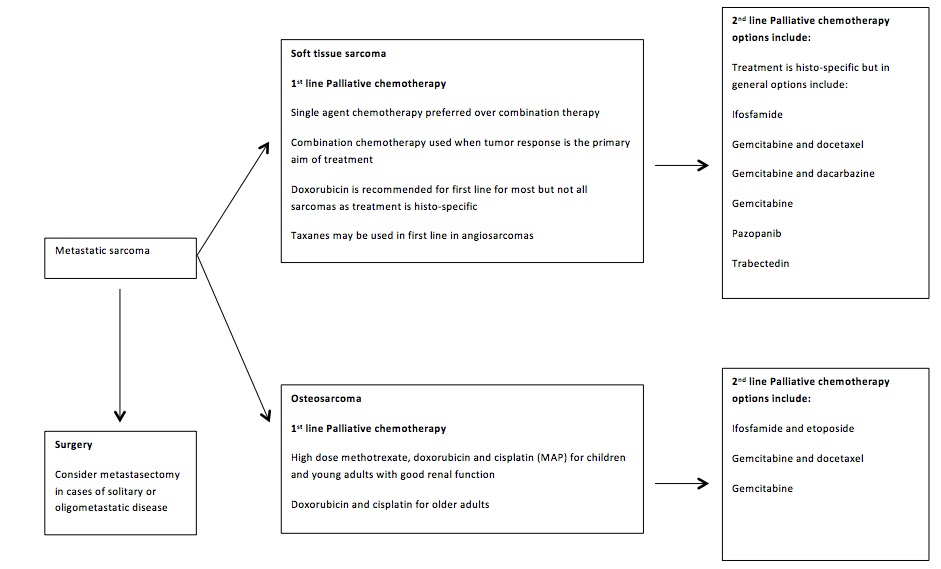